My friend at the Paranoia Is Freedom blog just posted this years album as a free download. A release to promote this years festiuval, it includes only artists participating. Not all, but some. The release is as all years a Go To Gate Records release, but this time it is a download release only: 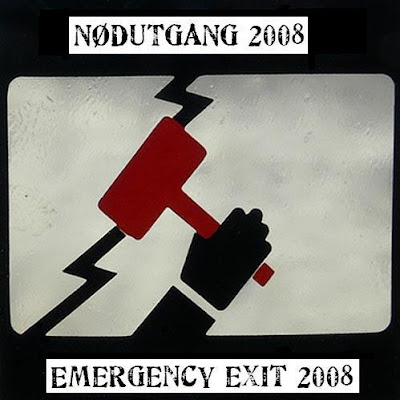 This is a free download album to promote this years NØDUTGANG festival. It will hit everyone brave enough to be there between June 12 and June 15. The concerts and performances will be held at several venues in Bodø (Norway). For more information about the program, dates, prices etc look at this link.The album is the third in a row that pick up several off the artists on the festival and let them present their music. The first two years (2006 and 2007) came out as CDs, but we thought that it might be better to let it be a free download album. So here it is. Free for everyone to download and distribute at their www or blog or whatever. NO ONE has any permission to take any kind off fee for downloading these tracks. OK enough words lets get into the real thing. Here is the tracklisting;
Art Errorist – Esistmirkalt
Bagio – Migraine
Bjerga/Iversen - Theres A Ghost In The Dream Machine (extract for Nødutgang)
Blaakraft - Opus 23
Hr. Vandal - Through the air
La STPO - Colonies (Edit)
NXP - Soundtrack of our lives (emergency exit mix)
PLX 15 - Power Within
Scared Dog - A Space Tail Pt 1
Skoulding, Zoë – Astrolaire
Tognazzi featuring Haddy – Song For A Dark Girl
Torstein Wjiik – 010
Wærnes, Ronny - Trans-micro Impro Express 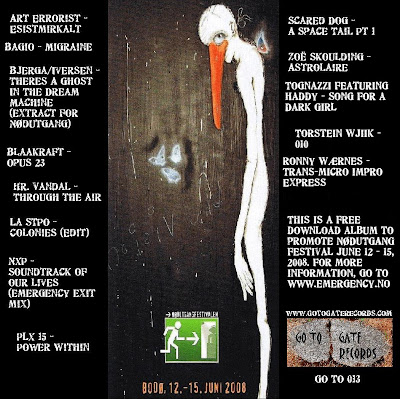 The album is in two parts as RAR.
You can download part A here and part B here.
The albums for 2006 and 2007 can be downloaded for free here.

Posted by autovern at 12:47 PM No comments: Links to this post