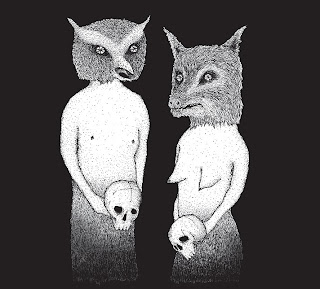 The June edition of the Jazkamer monthly series, We Want Epic Drama, is the first album with the full metal line-up since the highly acclaimed Metal Music Machine was released. Two drummers, electronics and three guitars promises quite an onslaught. However, that is often the case with Jazkamer, two or more members almost always manages to present an impressive wall of sound, no matter what.

As with the March edition, this album is a full-on production, with lots of drums apparent, though not in a metal doom kind of way you might expect from this line-up, but more free improv full speed ahead noise style. Divided into two tracks, this album is more than 70 minutes long. Both tracks starts off with hard-hitting freestyle drums, and guitar and electronics follow. By the mid/end parts of both tracks the drums have disappeared, and noisy guitars and electronics take turns in being more apparent. But this is beside the point. The interesting, exciting works of this album is how Jazkamer explores every bit of the sonic palette. Maybe less of the more subtle sides, but all kinds of feedback, harsh white noise, pink noise, screeching and wailing guitars, whistling, rumbling, airplanes, cars, just to name but a few I could sense myself.

So, does this six-piece make any difference compared to a smaller line-up? It certainly does. For one thing, the use of guitars makes for an interesting change that I like about this CD. At times you hear metal-sounding guitar riffs in combination with free improv use, all blended nicely in the mix of drums, electronic noise and strange sounds. Both tracks have so many layers and so many sounds that We Want Epic Drama deserves many rounds in the player. I find myself discovering new things every time. As with the March edition("Jazkamer – The Monroe Doctrine"), it also triggers a lot of happy places with me. It is hard, loud, massive, energetic and guarantees excitement for me yet another time.

This review is also available in Freq Music Magazine

Posted by autovern at 2:44 AM No comments: Links to this post