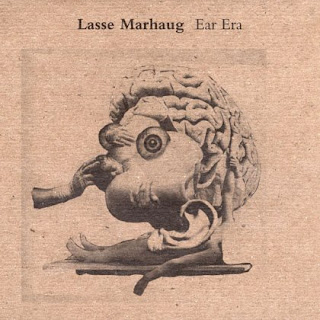 Earlier this year Lasse Marhaug got an interesting opportunity. The Henie Onstad Art Centre invited him to go through its massive audio archive. An archive of recordings from concerts and also recordings made in the Norwegian Studio for Electronic Music, located at the centre for some years in the 70s. Recordings (about 800 tapes) filled with artists as different as Karlheinz Stockhausen, Jan Garbarek, Arne Nordheim, Mauricio Kagel, Webster Lewis, Steve Reich, Laurie Anderson, Soft Machine, and various Norwegian jazz and rock artists. Marhaug was asked to make use of these recordings to make his own piece. The result was presented at three concerts at The Henie Onstad Art Centre, and also as this CD version released by Prisma Records. It is in only 500 numbered copies, and there will also be a deluxe box-set of 50 copies available.

Being only about 30 minutes divided into 11 unnamed tracks, it promised some excitement and variety. The first track starts with wind, voices and some naïve synth playing, making you wonder who initially recorded it. For most of the CD it is difficult to identify the original artist, unless you have a very specific knowledge of some of the pieces being used. Instruments and voices are easy to spot though. Marhaug process them slightly, inlcudes various bits and pieces, and makes the track sound a bit melancholic or sad. This first track sets the direction for the majority of Ear Era. It is almost to the end a CD filled with melancholy and sadness, only with a few exceptions, and it makes me wonder if it was made on a rainy day.

One of the techniques Marhaug uses is to cut out bits of music, and loop it, but also twist the pitch, speed it up, slow it down to make it change its mood or pace. A good example of this is in track three where a couple of loops are mixed together during the first half of the track and the loops themselves are slowed down from beginning to end, and thus making them sound sad. Other cut out bits are added to the track and many of them treated the same way.

To draw attention to the point an opposite effect is added in track four, which starts off with a rather noisy, less sad loop, making a happy rhythm. But after a minute the rhythm dissapears and what’s left is some strange sounds being quite mellow also, and the track ends just after two minutes.

So the album continues, a mix of strange, weird sounds and noises, mixed carefully with some more noisier, harsher bits. Melancholy being the most prominent mood to me, but also occasional happiness and energy. What is really striking about this release, is the gentle way Marhaug mixes it all together. No part, strange or noisy is overfocused, and everything comes together as a nice whole. When seeing Marhaug live, it is easy to be overwhelmed by the sheer energy of his noise and performance, and it can be easy to presume that he would translate that to all his recordings, but here he proves just the opposite. Nice, gentle, short tracks, but still challenging to listen to, and after 3 – 4 listens, I still find myself being surprised.

The CD ends in a way that makes me think it needed a happy or more promising finale. Track 10 is a short track of just over two minutes, and has almost the same sadness as the rest of the album. It starts with some rumbles and a rythmic sad loop, but when left with 30 seconds a female voice enters the track, and at the very end it is clearly that she is saying: “it will be best for you if anything is good for you”. And so the track ends, leaving the door open for track 11, which starts with a simple, almost generic loop. After a while some more driven parts come to life, and the track gets more and more noisy, but in a much more happy mood than the previous tracks.

This CD made me sad and made me smile. It even made me want to dance occasionally, but also made me wanting more. Ear Era is a piece of music with lots of diversity and it triggers various moods. What more can you ask? Some more, maybe?

Available from the artist.

sounds great thanks for the review, will look for it